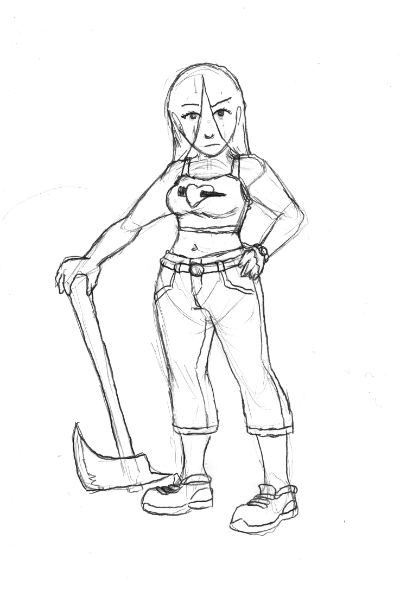 Born and raised in Vallisca, Iowa: Brittany was the only child of Angela and Marcus Winters, the owner/operators of the Vallisca Ax Murder House, a historical landmark turned Museum/Bed & Breakfast.
Aspect: Born into Weird

At 12:01am June 9 2012, precisely 100 years after the horrible murders that had christened her home, Brittany was awoken by the screams of her parents. Rushing into their room only a moment too late, she came upon the spectral form of a fireman looming over the bodies of her parents wielding an ax. In that moment, fueled by righteous rage and terrible purpose, she leapt at the spirit and in the ensuing fight, managed to wrest his ghostly ax from his hands and part his head from his shoulders.
Aspect: The Ax that killed my Parents.

While working to hunt down a creature the news papers had dubbed “The Roseville Ripper”, Brittany wrongfully suspected and began tracking Thomas Owens, thinking him behind the grisly murders. Despite having crossed paths with him before The Ripper’s rise, she insisted he was the culprit, as all evidence pointed to him, until while stalking Thomas – the two of them happened onto the real Ripper. Seeing that she was wrong, she wasted no time in helping Thomas rid the world of a less than savory creature of the night.
Aspect: Destiny’s a bitch… and so am I, sorry.

Craig Hale, insomniac Wizard stumbles into Brittany’s coffee shop “Sacred Grounds”… after relaying to Brittany why he looks so sleep-deprived she devours his hard luck story and offers to refuel him with coffee whenever he needs to keep the Night Terrors at bay.
Aspect: Into every generation a SUCKER is born.

While attempting to track down some nasty form of supernatural beastie (and failing miserably), Brittany crosses paths with Jack Hunter, a police officer who has newly discovered the ability to shapeshift – tracking the same beastie. He teased her about her horrible tracking skills and she pulled his tail (heh!) out of Dodge, when it became apparent he knew nothing about fighting monsters. A deal was struck between them, he’d teach her his Native American tracking methods and she’d teach him to open a “Can of Whoop-Ass” on the creatures of the night.
Aspect: The Student has become The Master.

Brittany becomes involved in Alison Harper’s disappearance, when she overhears two brokers from DH Acquisitions talking about a recent package. Suspecting the worse and knowing that the organization is associated with the great Dragon Chrysophylax, she follows them to the IDS Tower.

Brittany makes her way into the offices with a smile, coffee and some donuts from Sacred Grounds and meets Alice LaRue. They exchange casual threats and she gets to meet Windsor Simon Pearce. Pearce attempts to hire Brittany to find the girl for him, but she declines not wanting to put Alison in a gilded cage. Pearce recognizes Brittany’s uniqueness and both his interest and that of Chrysophylax’s are peaked. They then seek to “acquire” Brittany. She again refuses and leaves the IDS Tower, only to have Alice and personnel from Monoc Securities attempt to kidnap her. She battles her way free and is aided in her escape by the Man in the Horned Rimmed Glasses.

She is hired by him to aid Thomas Owens in rescuing Alison. They meet up with Jack Hunter and assist him in defeating two [[Hel’s Angels | Hel’s Angels] ]bikers, Lobo and Tiny. Using Jack’s resources they learn that Alison is being auctioned off in the Magic Bazaar. They confront Clinton and learn that Magnus Jotunnson is going to sacrifice her.

She confronts Magnus in his lairr and uses one of Bobby Chan’s potions to grow to giant size and defeat the Warlock. She then accompanies Bobby and Jack to the Red Court rendezvous and helps free Rosalie Pearson from captivity. She grows distraught at Alison’s apparent death. She uses that passion to convince Craig Hale, Madison Jotunnson and Steve McCellan to acknowledge her right as a Freeholding Lord. In Exchanges on Faith, Pearce acknowledges her independence, but that has not lessened his, nor Chrysophylax’s, desire to acquire her.

Brittany and Ripley rescue Jane Doe from Ghouls dressed as Helping Hands Shelter Workers in Helping Hand. Jane reveals that the shelter workers are ghouls and feeding off homeless people. She states that her friend, Grace, has been taken as well. Brittany and Ripley agree to free the girl. They leave her at Sacred Grounds when they get a phone call from Bobby stating that there is a Stone Dragon terrorizing the City and he needs their help.

Brittany aids the other investigators in defeating the Stone Dragon and fighting off marauding Hel’s Angels, however she gets a phone call from Jane that Sacred Grounds is getting assaulted by ghouls led by Aaron Douglas. Brittany, Craig and Sister Dark return to Sacred Grounds to find that it has been burnt out by a smoke bomb. Craig and Sister Dark agreed to put their quest on hold for John Wesley Jacobs III to aide Brittany in freeing the homeless people from the clutches of ghouls.

The three assault the Helping Hands Shelter and learn that Aaron is a member of the Order of the Blackened Denarius and has the Fallen Gog’s coin. She also crosses paths with Sanya and Alek who help her defeat the ghouls and drive Gog off.

Brittany realizes that Jane and Grace have been taken to Witch’s Hat Tower for Evan St. Claire’s ritual sacrafice. She, Craig and Sanya follow Gog and during the assault of the tower they battle Gog, eventually defeating him. Brittany arrives at the top of the tower just in time to sever Evan’s coin from his flesh, allowing Bobby to complete his self sacrifice. Brittany was able to free both Jane and Grace from their bonds.

In Spiritus Securis, Brittany’s Ghost Ax continues to drive her at night. She finds herself waking more and more to rescue children from ghostly predators. She has a romantic encounter with Sanya in Band of Barristas while they help each other recover from their wounds. Grace and Jane also approach Brittany asking that she trains them to defend themselves. She agrees and hires them on as Barristas. This leads Brittany to taking in other “lost girls,” which creates a significant financial strain on her.

During the events of Changing Faces, Steve cashed in his favor and Brittany agreed to accompanying him and Madison on a date to Pearce’s galla. Brittany quickly grew concerned as she watched her friend fall under the sway of the White Court Vampire; she also worried that he was starting to have the same effect on her. She also received a call from Craig regarding Puck’s ultimatum and from Thomas warning her of the Red Court hit.

She was able to persuade Steve to leave Madison alone in exchange for a night with her; to which the White Court Vampire quickly agreed. Brittany then defended the others from the ambush led by Susana Valencia. While the other investigators went downstairs to deal with the explosives, she and Steve went upstairs to help Pearce in his duel against Carlos Ortega.

Brittany prevented Susana’s interference by jumping on her back and forcing her to crash into the roof of the Foshay Tower. There she was able to tear off one of her wings and throw her over the side. Brittany was then able to break Carlos’s circle of protection, which allowed Pearce and the Shadow of Crysophylax to kill the Red Court Duke. Pearce acknowledge the debt that he and the Dragon have towards Brittany. Steve, moved by her bravery, released Brittany from her promise stating that he wants her to come to him willingly. 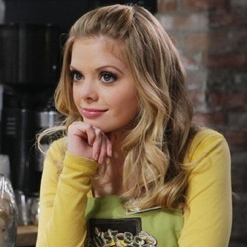