Lucky Dan is Clinton’s loyal sidekick and boon companion. He is a stoutish, beer swilling half goblin who aides Clinton in his business engagements, especially if it involves more beer.

Lucky Dan spends most of his time watching reality t.v. and has become taken with Jersey Shore.

During Falling Star the investigators crossed paths with Lucky Dan while they were casing Clinton’s tent in the Magic Bazaar looking for clues regarding Alison Harper’s whereabouts. He remained pretty oblivious about their intentions even when they began confronting Clinton about his possible role in the abduction. When Clinton escaped the tent, he managed to take Lucky Dan with him.

In Strange Smells, Jack Hunter and Moss question him about purchases that Katrinka Hunter made. Moss had spiked his beer with iron fillings, making him vulnerable to more violent forms of questioning. Lucky Dan reveals that Kat purchased some “Sandman Powder” from Clinton, he was then able to scurry out of Augie’s. 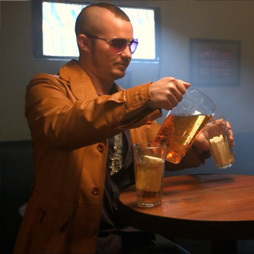