Moss is an excellent thief, just lousy with investments. So, while he has made heists that would have allow himself to retire many times over, he ends up giving it away. To a shelter here, a drive to save the whales over there, or construction for some low income housing; it always dribbles right through his fingers. He then just has to move on to the next score. No one ever said that being a modern day Robin Hood was glamorous.

When Jack Hunter saw the video of Katrinka Hunter he called Moss because of his underworld connections. They had an uneasy friendship, but one bound by the fact that they both cared for Kat. (Moss owed her his life.) Moss was able to do some research and met with Hunter at Augie’s along with Lucky Dan.

Through trickery and intimidation, Moss was able to learn that Kat had purchased some Sandman powder from Clinton. She also had a large amount of cash to do so and the only way to get that information was to look at the “books” in Foshay Tower. Unfortunately for Moss, Peter Capra also had interest in getting Carlos Ortega’s secret ledger and strong armed his way in helping both Jack and the sneak thief.

Changing Faces chronicles Hunter, Moss, and Colin Patterson’s break-in of the Foshay Tower. Moss utilizes his abilities as a sneak thief to help the other two past warring Red Court Vampires and Broadway Shotgun Boys. He also discovered the explosives that they had planted, disarming one which he used later to blow a hole in the side of the building. He was also able to break into Ortega’s vault before Michael Abernathy and secure the ledger.

Moss and Hunter break way from Colin with one group feeling as if they betrayed the other. Hunter and Moss page through the ledger and learn of the accounts linked to Thomas Arichbald and the Abandoned Hamm’s Brewery and Mansion. They break into the area and find Kat bound to a ritual device powering dark Native American magic. Hunter recognizes the device and breaks it, while Moss frees Kat.

It is here that Moss learns that the real Jack Hunter has been dead a long time and the “Hunter” he knows is really The Roseville Ripper, whose power has been bound by this device. Moss’s fate is ultimately unknown, but it is presumed he was killed by the Ripper. 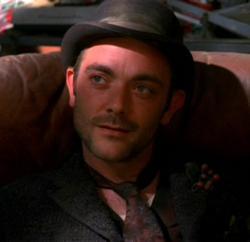